TM Track operations are located in Parsons, Kansas in the former MKT (i.e. “Katy”) Locomotive Shop.  The Katy Shop was a prominent Railroad Shop location for the KATY from the early 1900’s through much of the century.

There is probably no city in the country that has a more storied or specific history and future that is tied to the railroad than Parsons, Kansas.  The location for the city was picked specifically to serve as a railroad town after discussions with another city further down the rail line fell through. The city itself is named after Judge Levi Parsons, who at the time of the city’s founding in 1870, sat as president of the Missouri-Kansas-Texas Railroad (MK&T/Katy).

Parsons was the location of the general headquarters, major shop complex and large switching yard for Katy Industries and the rail line. History tells that one high-ranking Katy official donated the land and used Katy money to finance the building of the town’s first bank.  Katy funding also was used to start the city’s first, and still running, newspaper, the Parsons Sun, soon after the town was founded. Due directly to the influence of the Katy railroad, the population of Parsons went from zero in 1870 to more than 6,500 by 1882.

Union Pacific Railroad purchased Katy Industries, along with the rail line, in 1988.  With this sale, a deal was struck for the long term future of the city with a million dollars being set aside for economic development purposes. For more than a decade, the popular Katy Days event has been held in Parsons and draws thousands of people. The three day event celebrates the town’s railroad heritage with a UP/Katy reunion tent, historic displays and even a live track laying demonstration by former UP/Katy employees. This track laying event is one of the most popular scenes at the festival and features as many as a dozen former “Gandy Dancers.” These former railroad workers lay two separate sections of track by hand just as it was done in the railroad’s heyday, introducing a new generation to the history and hard work that helped create the rail industry.

The Katy Railroad Historical Society was formed in Parsons on October 1, 1977, with a nucleus of 43 charter members. The Society has grown to include members from all reaches of the former railroad and has provided services and historical assistance to towns stretching across Oklahoma and Texas. The Parsons Historical Society currently operates the Iron Horse Museum, which features several Katy artifacts including a Katy switch yard engine that is on display next to the facility. As The City of Parsons nears its 150th birthday, the railroad history that forged the city sits in retrospect to the ability of the city to build upon its storied past and utilize the economic engine that was left behind by the very railroad that gave birth to the community.

Following is a Timeline summarizing the colorful “life” of the “KATY” Railroad, along with photos displaying the long and historical Railroad lineage of the “KATY” Shop in Parsons, Kansas:

In the mid 1800’s there were several roads competing for a route to the Indian Territory. Their promoters were ambitious to extend their lines to the Gulf, to Mexico, or to the Pacific.

Colonel Robert Smith Stevens and Judge Levi Parsons were New York promoters of the road that later became the Missouri, Kansas, and Texas, called the “Katy.” Levi Parsons had visions of a great empire for the Katy, especially if he could get generous land grants by beating James F. Joy, promoter of the Border Tier Road (“Joy Road”) to the Indian Territory.

Stevens and Parsons selected the site for a town that they would control. The site selected is today, Parsons, Kansas.  Parsons was named for Judge Levi Parsons, promoter and president of the Katy Railroad. The large Katy shop in Parsons is still in operation.

The building of the road was a battle for a time in competition with the “Joy Men.”  To win the race, F. C. White was instructed to “Bull- whack” the builders of the road. White City, Kansas was named for F. C. White, superintendent of the Neosho Division of the Katy Railroad. F. C. White was responsible for the construction of the road from Parsons to Fort Scott.

On June 6, 1870, the M. K. and T. Railway (the “Katy”) won a three-way construction race to the Indian Territory border.   The “Katy” earned the sole right to build south through the lands of the Five Civilized Indian Nations to the storied Red River and Texas.

In March 1871, a line from Sedalia, Missouri was built southwest to Ft. Scott and joined the main line at Parsons, Kansas.

March 1871 marked the formal founding of Parsons, Kansas in honor of Judge Parsons.

On December 25, 1872 the North and South were united all along the churning frontier when the Missouri-Kansas-Texas Lines spanned the storied Red River and Denison, Texas, and linked with the Houston and Texas Central Railroad to give America a “new route to the Gulf.”

The projected Northeastern Extension of the Tebo and Neosho Railroad (the Katy) went from Sedalia to a junction with the North Missouri Railroad (the Wabash) at Moberly. The construction of this line, in 1873, forced open “the Sedalia gateway” and gave the Katy valuable access to St. Louis.

The Katy’s Northeastern Extension from Sedalia to Moberly was completed in late 1873.

As the Missouri, Kansas and Texas Extension Railway, the Katy was projected deep into Texas in 1878.

By 1888, it reached deep into Texas also extending the Sedalia, Missouri line to Hannibal.

By 1900, the Katy constructed a line from Kansas City to Parsons. One point on that line, Paola, had a branch going east to Sedalia, Missouri.

By 1915, the Katy had overbuilt lines into Oklahoma and other areas and went into bankruptcy and receivership.

In 1980 the Katy started using a main line of the liquidating Rock Island line from Kansas City and Abilene and Herington south through Wichita, Enid, El Reno, Oklahoma and Ft. Worth, Texas, which the Katy later operated as its Oklahoma, Kansas and Texas (O. K. and T.) subsidiary. 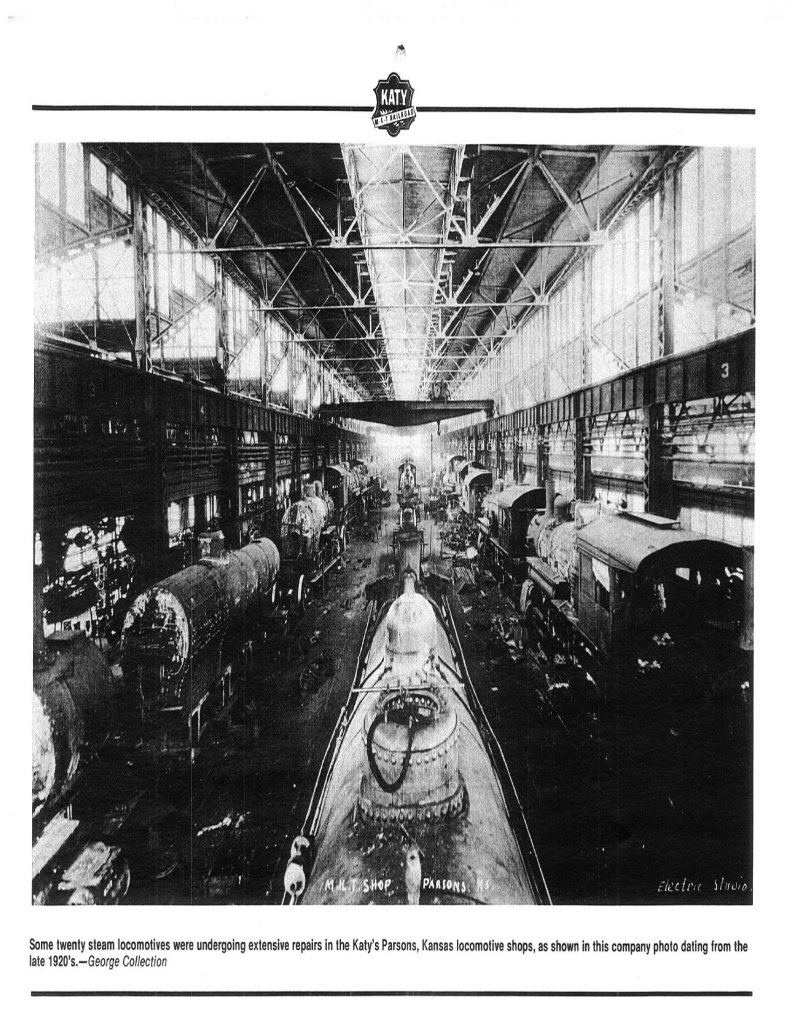 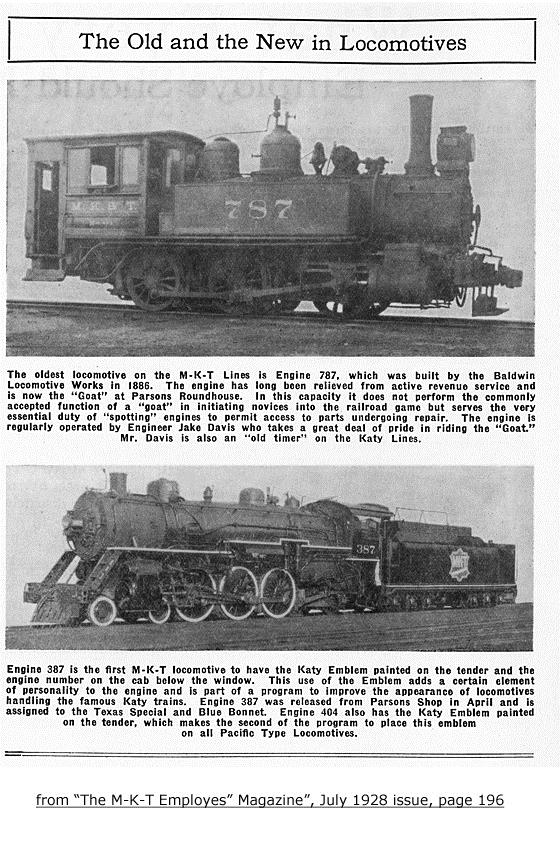 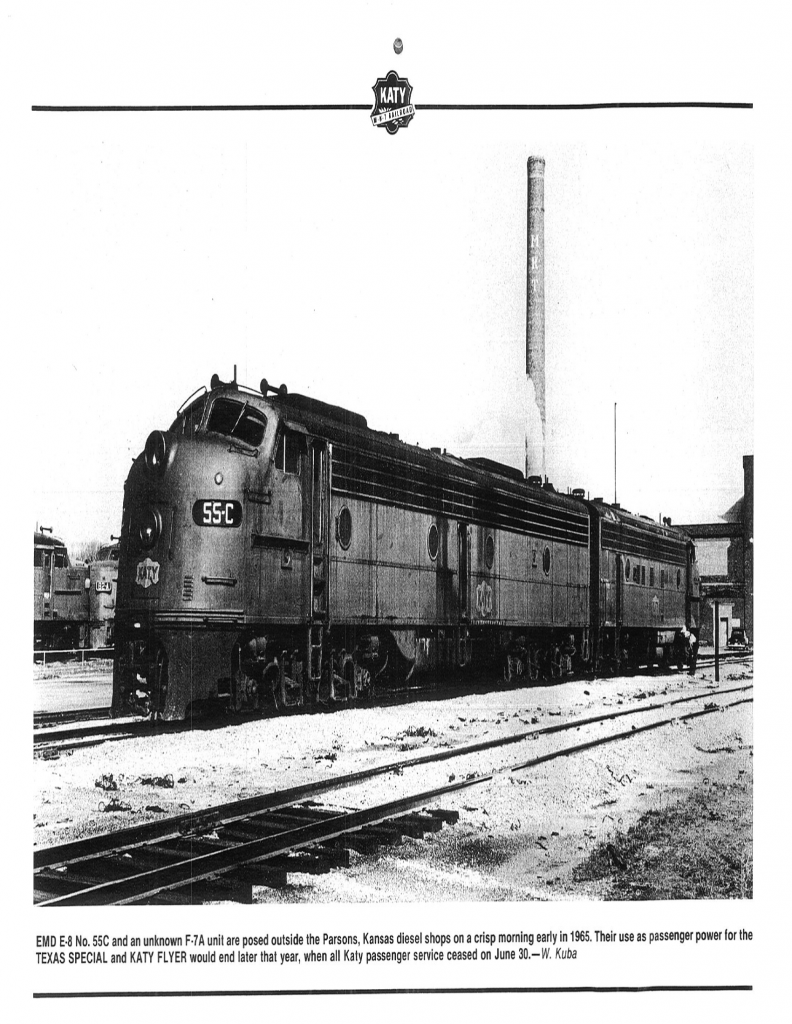 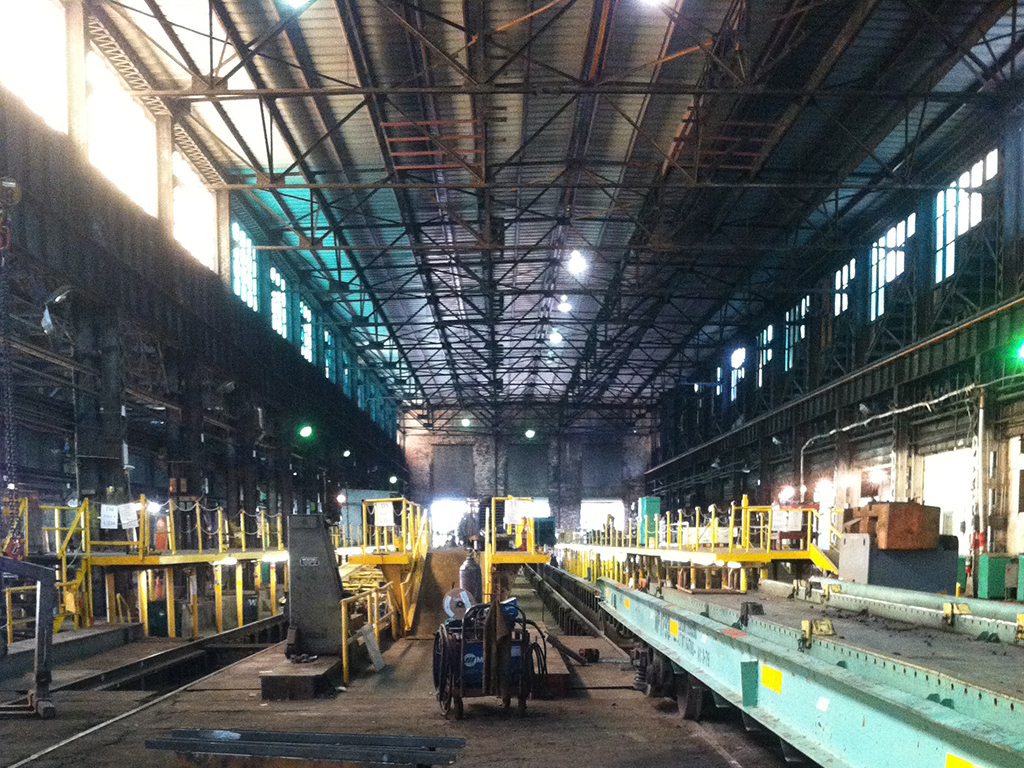